We all at DigiMantra had been planning an official trip since 3-4 months, and we are happy that our management decided to go to Hail Himalaya from 19th June to 21st June 2017. Thankfully, the trip was organized on working days only so that we could relax during the weekend. We were super excited because apart from fun, these outings create a team spirit among everyone and keep employees motivated.

There were two pick up points: Samrala Chowk and DigiMantra office. Our first stop all the way from Ludhiana was at a Dhaba, where we had aloo paranthas and lassi topped with lots of selfies and group photographs. 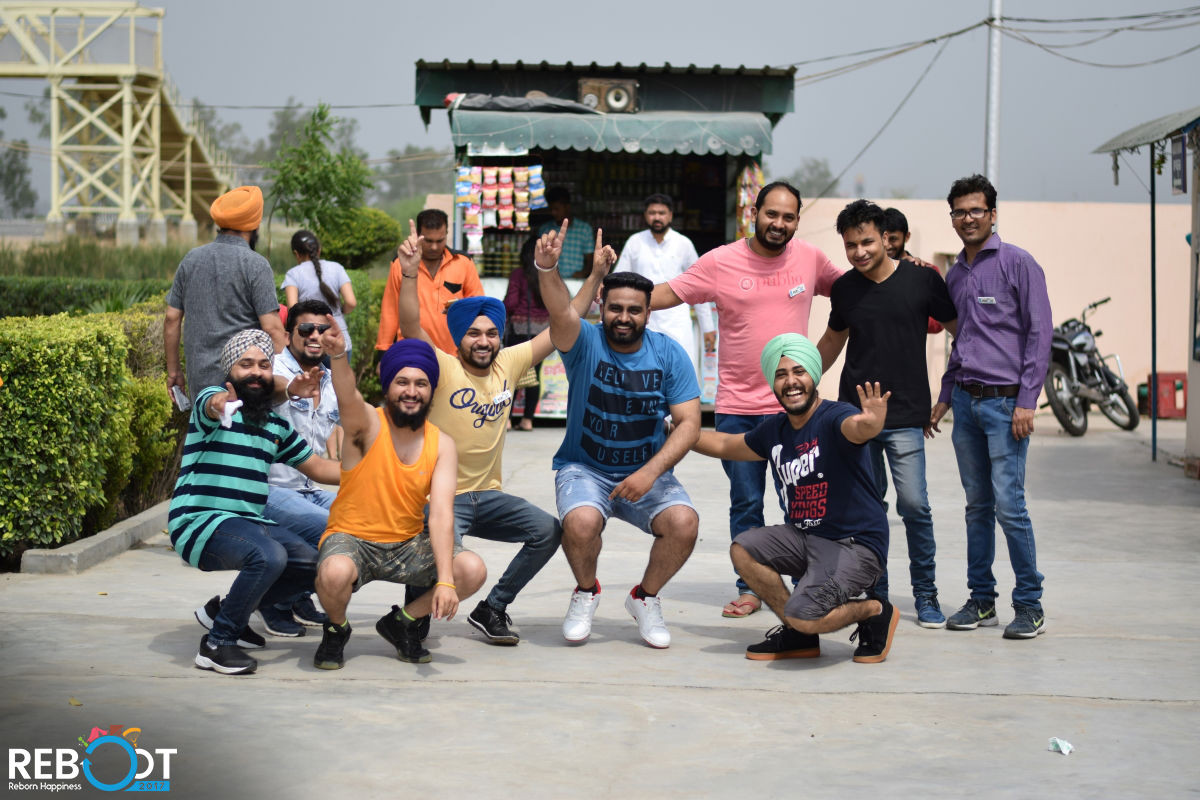 At Rajpura our bus took a turn towards the Shimla Kalka road which was under construction and there was only a single road left for the vehicles to move. Soon we reached the first toll plaza, and we got off from the buses and had a glimpse of weather, it was just awesome and felt like Shimla was welcoming us with dark clouds and cool breeze. Everyone was in a holiday mood, we cracked jokes, sang songs, did leg pulling, ate scrumptious snacks, and Hajmola candy were our partners in the bus. Enjoying, finally, we reached very near to our destination. Around 1 km of road was a raw path, it was bumpy, shaggy and would be dangerous on a rainy day.

At Shoghi, we saw sign board of Hail Himalaya towards the downhill. We picked our backpacks and started walking downhill while clicking pictures. We had to walk around 500 meters downhill while holding the rope sideways for protection. 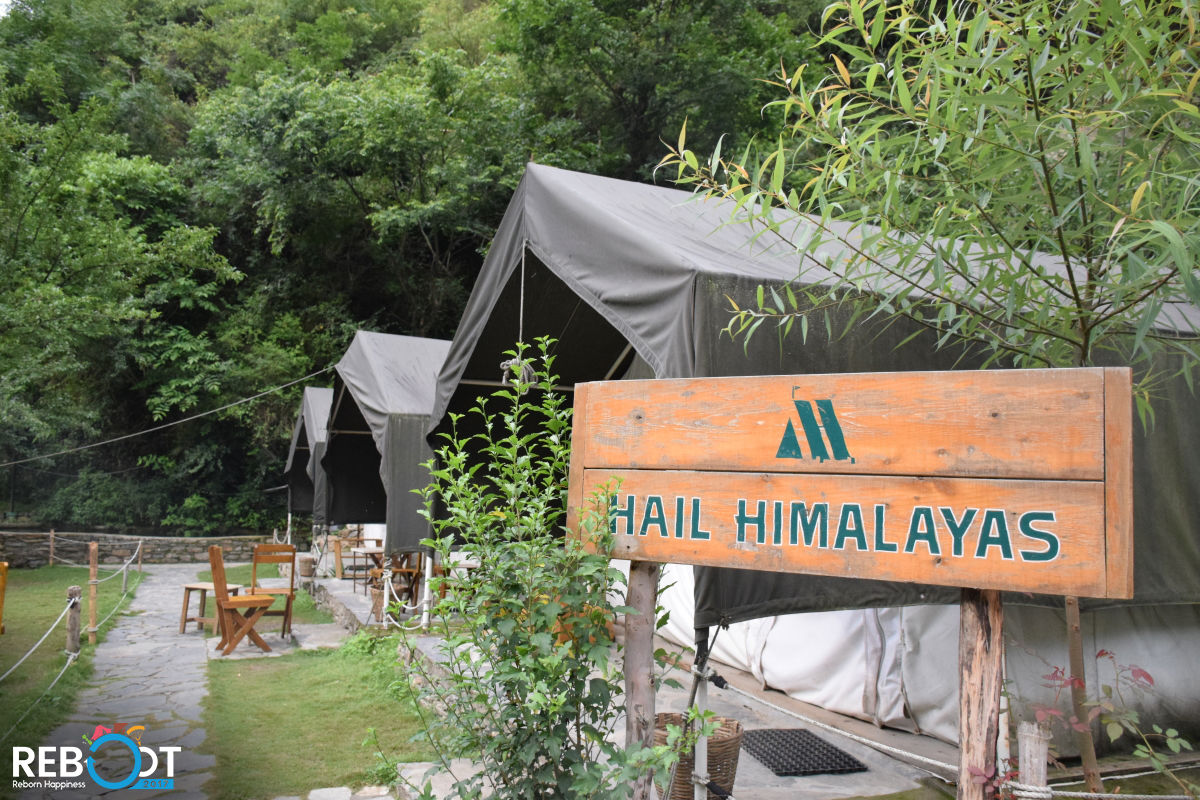 As we reached the Hail Himalayas entry point, the spectacular view and scene amazed us with lush greenery, mountains and a sound of water waves; everything was so beautiful. I would call it, nature at its best, it is a place for everyone who wants to rejuvenate and have a blissful time in the lap of nature.

Our Instructor had warned us about some bichoo booti and guided us to protect ourselves from it. He also restricted us from having Alcohol, told us to avoid misuse of water, loud sound, etc. as this place is located at the bottom of the downhill and there were several villages near by the place. 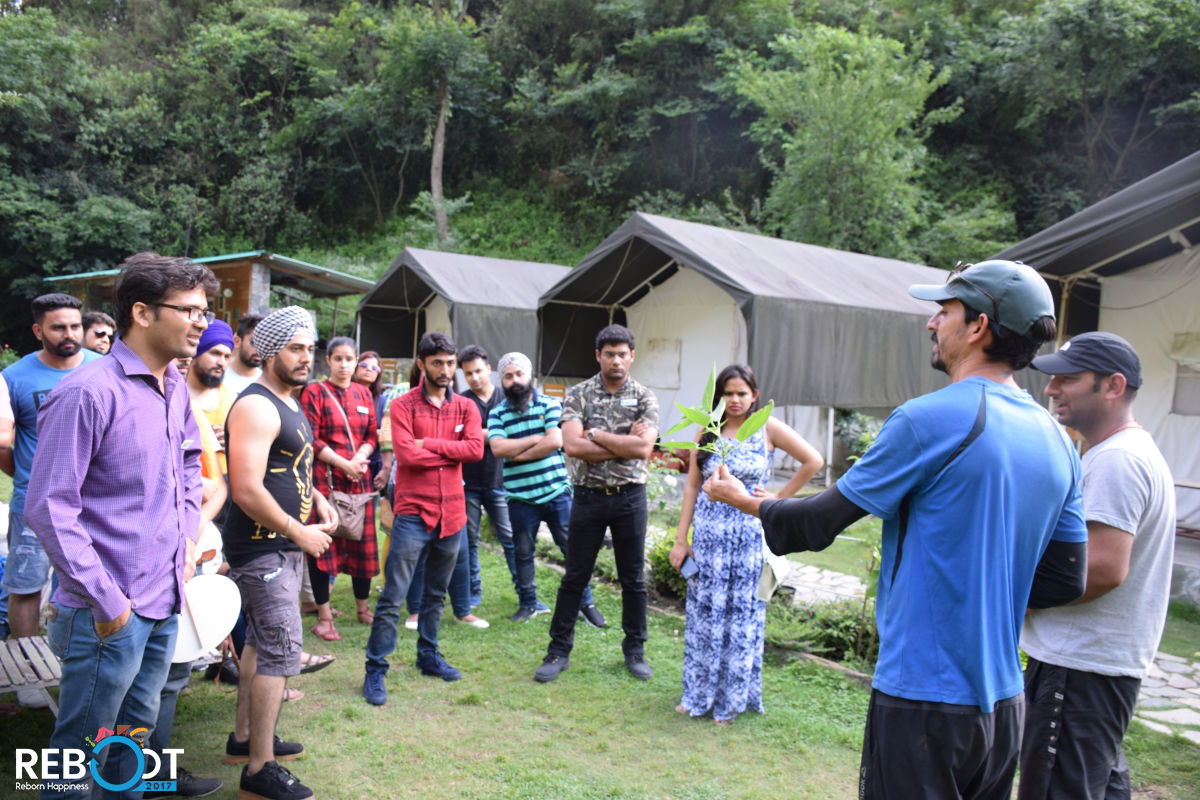 We settled down in our Tents, let me define the tent, the luxury tent will cost you around 5000 you can check the prices on Hail Himalayas website. Amenities offered in these tents are same as in 3 stars hotels with attached washroom, bedding, mirror, taps for both hot and cold water. Three people can accommodate in one tent, so I (Gurcharan), Puneet, and Manpreet shared the tent (sala itna bura time aa gya k in logo k sath sona prh rha hai :P). 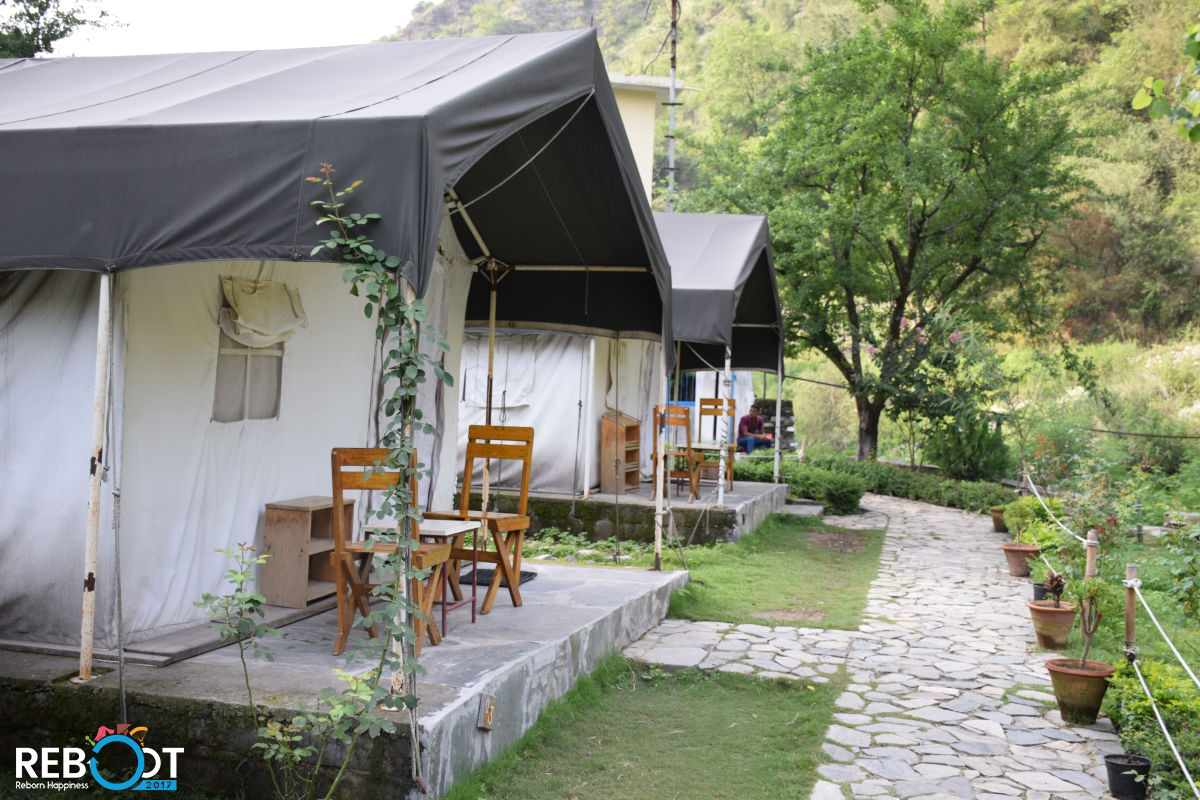 As we had reached in the evening, we were welcomed with evening snacks and tea. By going upward from the tent area, we saw a man made waterfall that is built with the stairs that lead towards the activity and dining area. 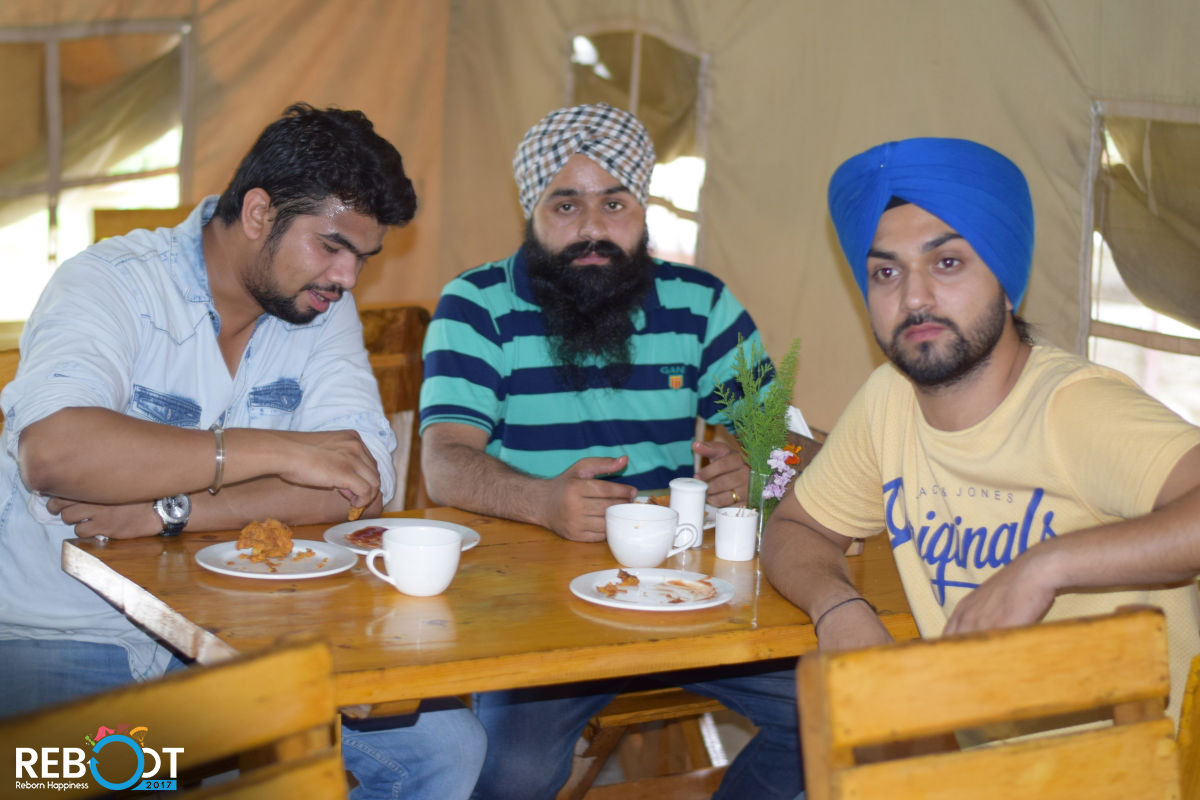 After enjoying Tea and mixed pakoras, some of us went to the tents to take some rest, and we went off to the uphill area to explore the unknown paths. We followed our leader Rajni who knew the paths and routes very well. Then we heard the voice of DJ system, and came back to join the whole group, we danced on Punjabi and Bollywood songs like anything. What I believe is that you should dance like nobody is watching you. 😛 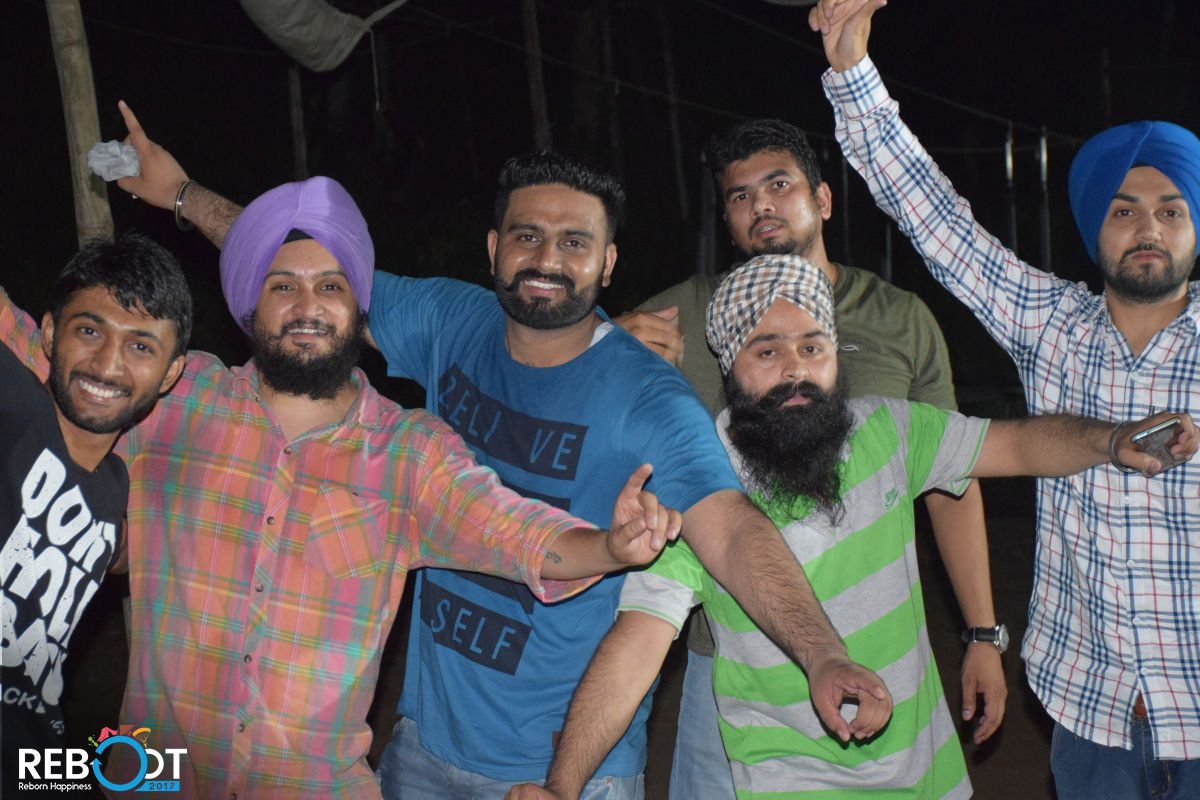 Then our coolest boss came to us and asked us to have dinner as meal timings were fixed. After dinner, we all came at the entry point of Hail Himalayas where you will find sun bath beds. We all settled and started playing Dumb Charades it was fun and a great teamwork activity. After that, we all said good night and returned to the tents and had a calm and sound full sleep.

We were tired, but still, we had to manage to get up at 6 in the morning. We got refreshed and got ready for the activity; we were a bit tired because last evening we also had Bhangra and Dance classes at our own on the lush green grass. We had our breakfast and then moved to the activity area. The instructor took our signatures on a paper that they would not be responsible if some miss happening takes place while participating in the activities. The instructor gave us brief details about wearing safety belts and helmets. After that, we all moved to the first action point. It is the activity where one has to start from one end and has to finish it at another end by fighting the hurdles with your inner strength, arm’s power, and your mind. I recommend you to wear half sleeves t-shirt with Capri. So first our Mr. cool and Manpreet slid the rope up to the other end then Pankaj and I did it. I had no idea about what was going on. We just jumped from the starting point. At the middle of the rope, you will feel the height, wind, and mountains. It was not that much longer in the distance but I enjoyed that ride. At the other end, one guard was receiving the people who had just finished the rope sliding and asked them to toggle their hook to the other rope for next activity.

The second activity was to walk on the tires that are tied with ropes, and your safety hook is hung with a top rope. There were two ropes alongside both arms, so you need to walk on tyres by taking help from both sides of the ropes it was an easy one. 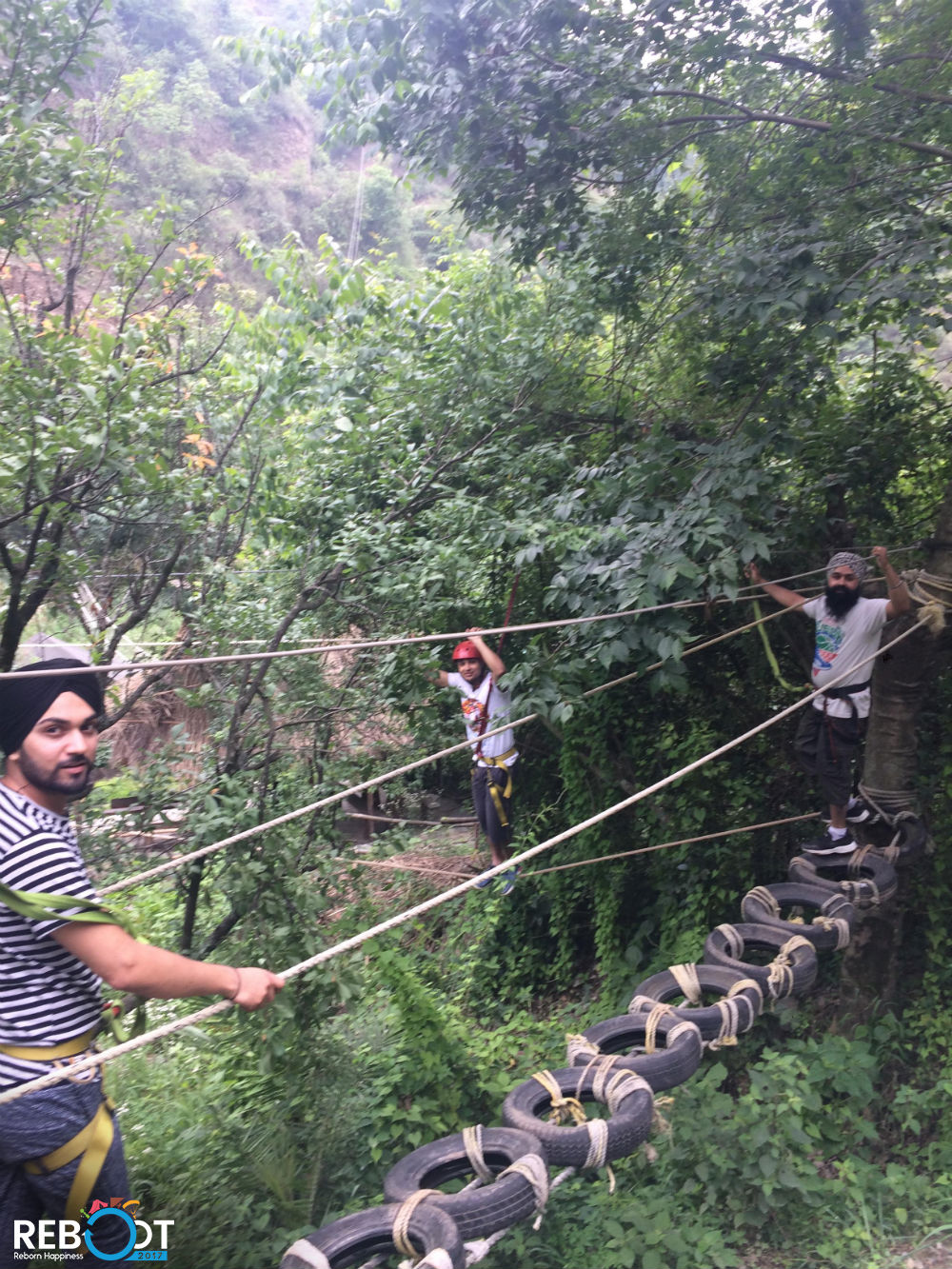 The third activity was to walk on single rope horizontally almost 100 meters of distance. While sliding on this rope, your body weight must be managed it’s a game of balancing yourself. While doing this activity, you will find trees of Nashpati and Aloo Bukhara, go and find what we call it in English. 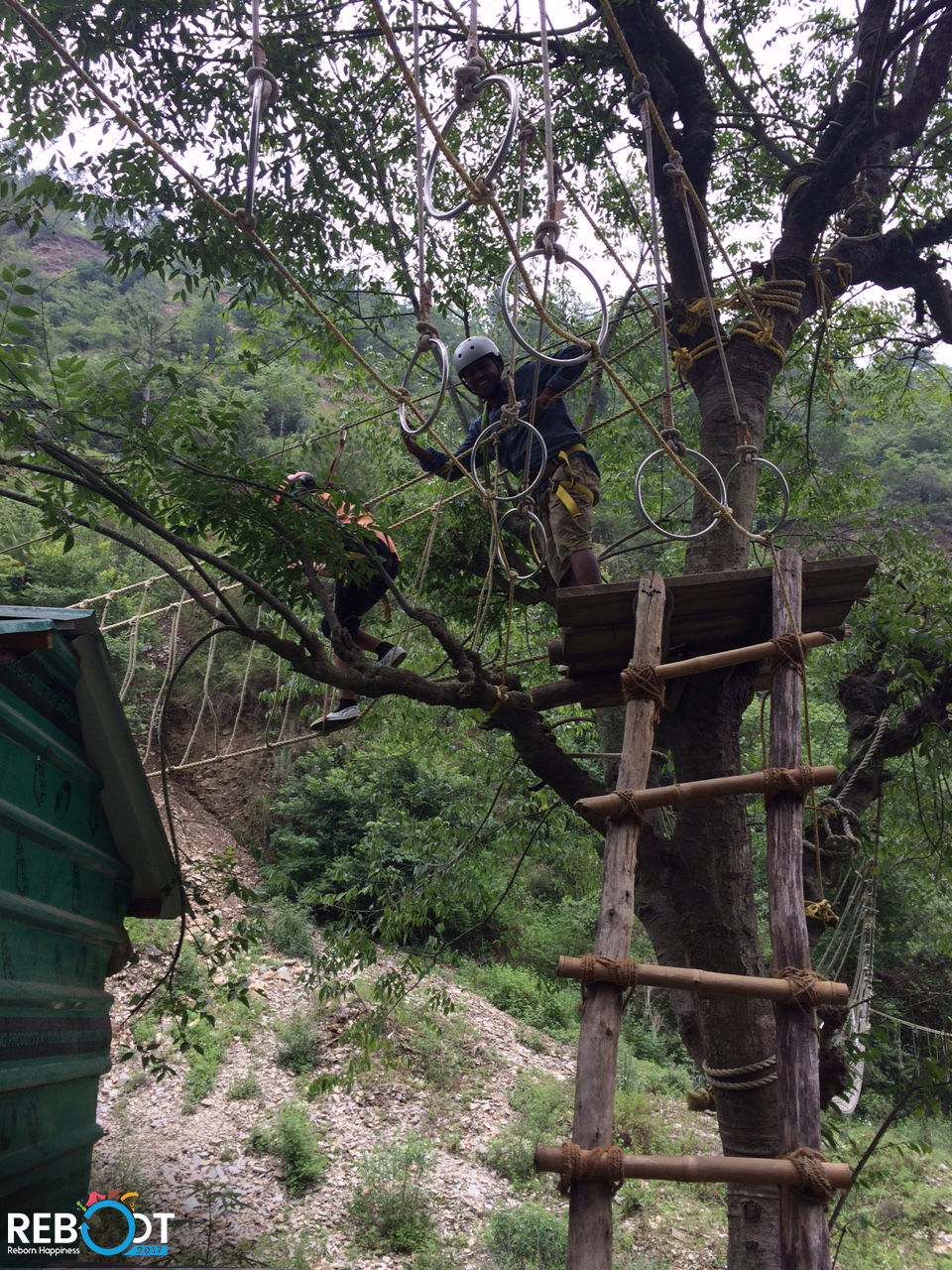 After finishing it, there was one another activity that was a bridge of rope, the longest rope from all other activities. Here you need to walk on the rope; the trick was that you could only move one foot at one time on the very thin rope and your lower body is also covered under the net of ropes. Because of this, you cannot move fast you need to slide yourself, and you will have a decent view of mountains and waterfalls while doing this activity. After finishing this activity next one was to walk on wooden pieces that were tightly tied up with the ropes, it was just a fifty-meter distance, after covering it; you come to the end of the activity. 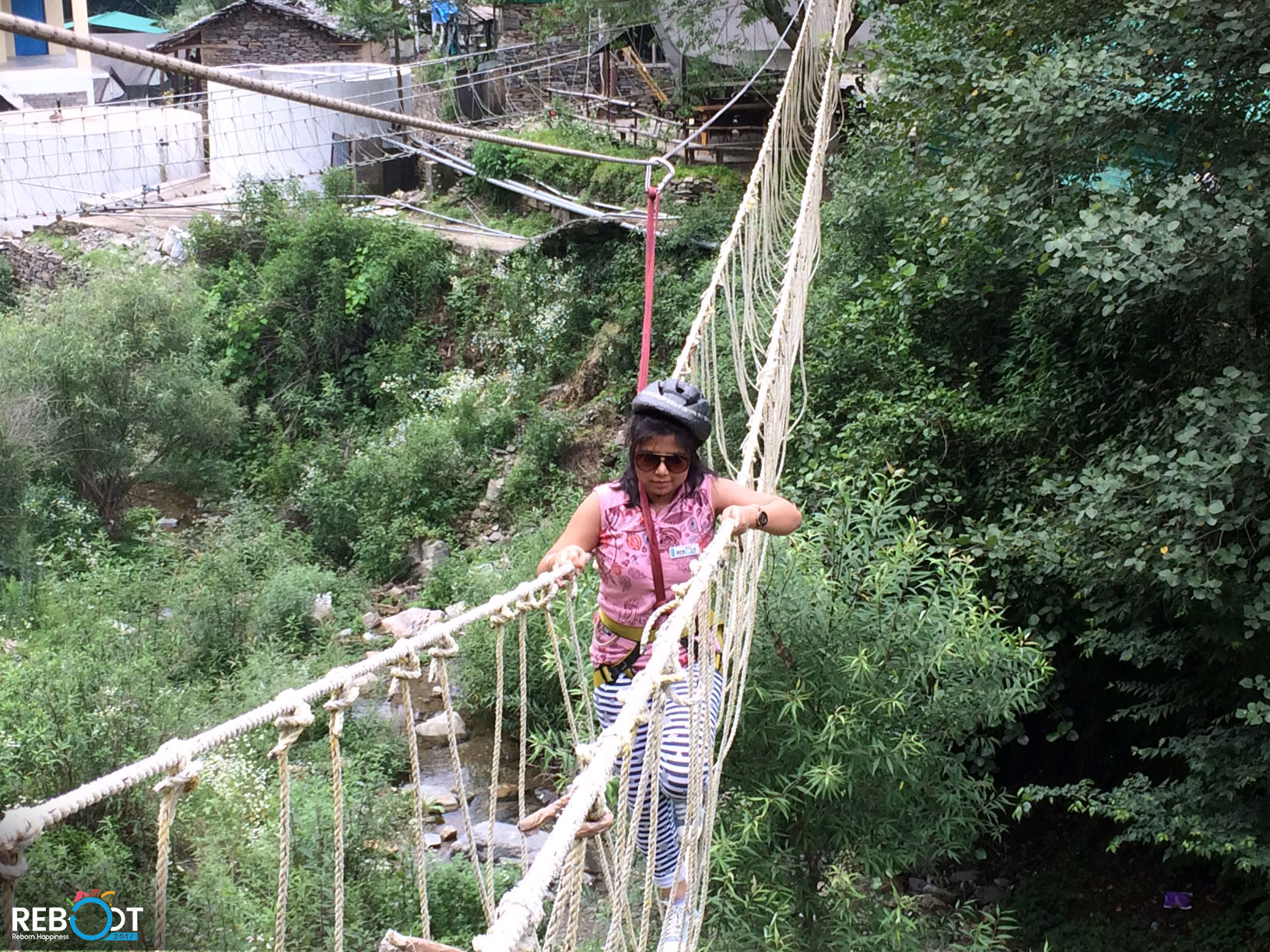 The last task was a rock climbing activity, it is the most difficult one, you will get hooked with a rope, and then you need to find the holes in the rock and climb the rope. It is straight like a wall and approx 50 meters in height. Climbing was difficult but getting down was easy and enjoyable somehow. We tried our luck, and almost everyone completed this task. This was the point where we all realized our inner strength and our fitness level. 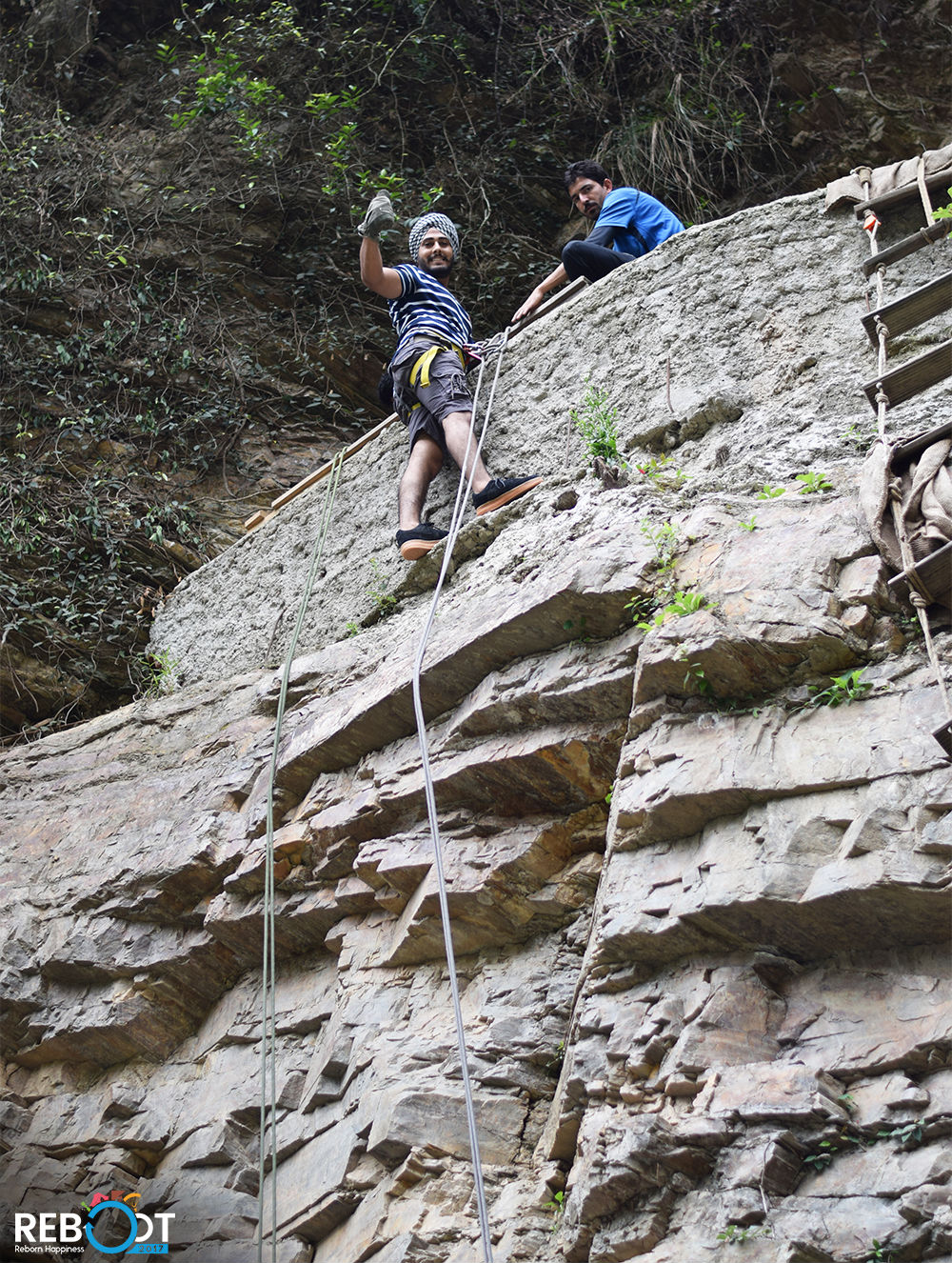 After that, we all headed for the lunch. You will get to eat nice food and scrumptious dishes here. The food is made with freshest ingredients brought from local farms and is a treat to your taste buds.

After having the lunch, we again sat together for the next activities that were group games. These were undeniably fun, and they also included some mind strategies. While returning to our tents, one of our team mates threw water on other and with this began the water war. We called it Holi festival which was celebrated with water. It was super fun; we all started throwing water on each other and enjoyed a lot. We spent almost one hour playing with water, everyone got wet, so the handsome guys of our group got a chance to show off their body building skills, and we clicked random pictures. I jumped off in the small tank that was built to collect running water (although it was restricted). We came back to tents, bathed and got refreshed. Then was the time for evening tea and snacks. There was a pet cat in Hail Himalaya, we all clicked pictures with it. After that, we explored the area and its surroundings.

We all gathered in the entry area in the evening and played medium music by connecting Roop’s small DJ system with online music from different mobiles. Not to forget only Jio’s network was working there, so we enjoyed and danced on several songs with different poses, I must say, we all had great fun. I forgot about the dinner, but we had it late. At that night we sat in the shed that near to the dining area. It was a very peaceful place with mid lamp, running water, and pin drop silence. Puneet, Kamal and me, sat there up to around two at night and gossiped, and then we came back to our tents to sleep.

This was our last day in the camp, and we had to go for a trek. It was a cloudy and rainy day. After having breakfast, we were instructed to pack our bags as at 12 o’clock we had to check out from the place. We checked out from there and gathered to start our trek; we came at the starting point of the trekking. It was a 6 kilometers long Trek besides the waterfall, and I must say it was a wonderful experience. 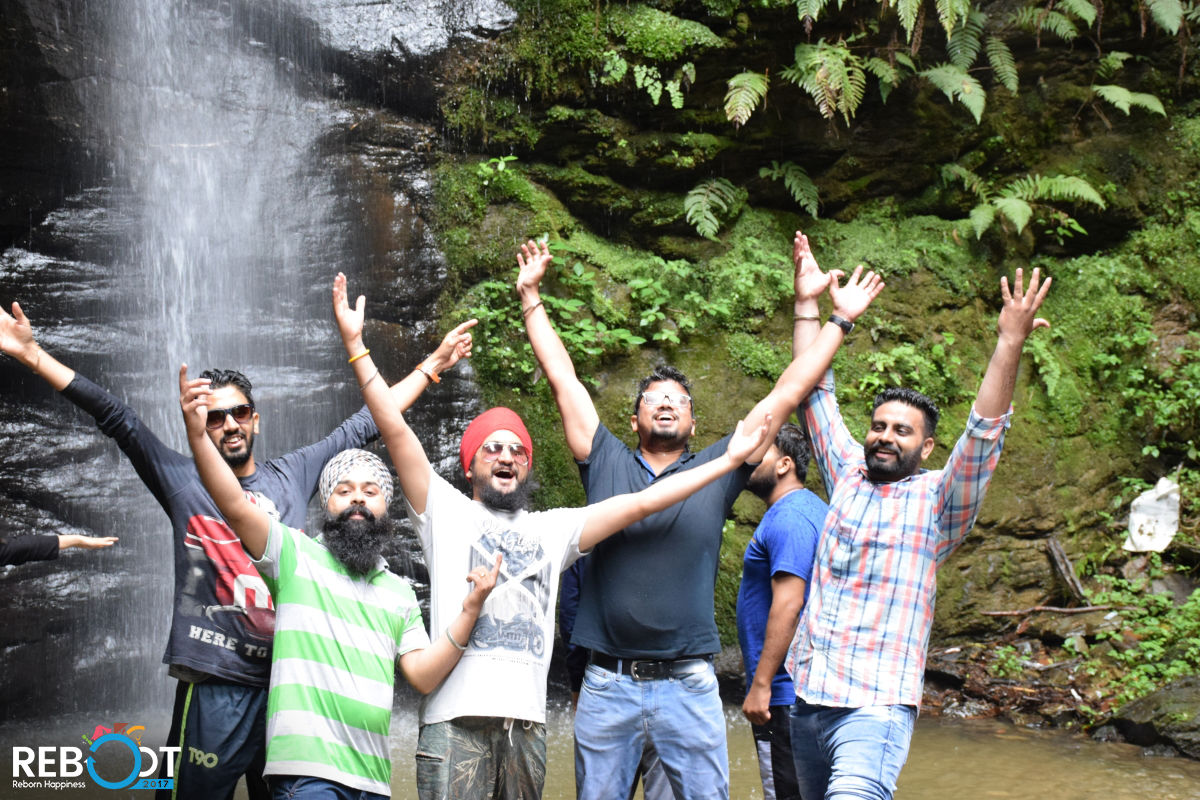 We had great fun and enjoyed the trek. There was a small temple upwards the hill just beside the waterfall, we prayed there, and all gave poses in Bahubali style and clicked photos from different phones and cameras. While returning from the trek, it started to rain heavily. We had lunch at Hail Himalaya, and they allowed us to rest in one tent. The rain stopped after 15 minutes, and then we moved towards our bus and bid adieu to this beautiful place.

Hail Himalaya is a beautiful and a worth visit place. I am going here again soon.